I Have Tom Thumb’s Saber! 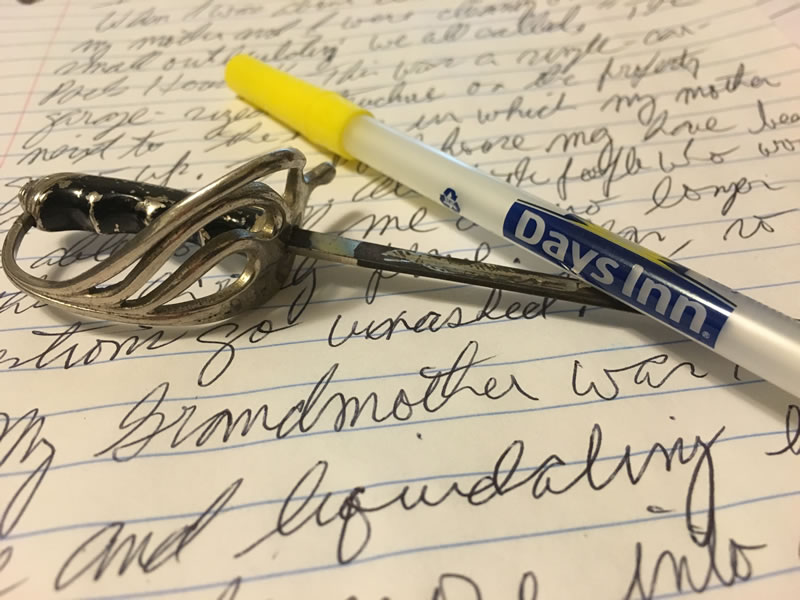 When I was about eleven years old, my mother and I were cleaning out a small outbuilding we all called The Pack House. This was a single-car garage-sized structure on the property next to the house in which my mother grew up. The Pack House may have been a smokehouse. All of the people who would be able to tell me are no longer on this earthly plane. Alas, so many questions go unasked.

My grandmother was selling her home and liquidating everything. She was to move into an apartment building near our house that was occupied, mostly, by elderly widows – we openly called it “Biddy City.”

Some treasures we discovered that day in the Pack House:

• A pair of large, oaken framed daguerreotype photographs – circa 1870 – of my great-grandparents. “The Pickets” now loom over us from the knotty pine wall of our den. My mother’s, mother’s, mother and father appear morose and disapproving in our raucous home. I have told the two of them more than once that they should be cheerful and glad to be among us; most of their ilk have been anonymously abolished to interstate exits, bearing witness to nostalgia and gluttony at the Cracker Barrel.

• Kerosene lamp parts leftover from when the lamps themselves were made electric.

• And a particular treasure: a nine-inch-long saber and scabbard. This is a perfect miniature sword.

Years ago when I was on the road in the subtropics, I made a point to visit the Ringling Museum in Sarasota. A circus museum and the official art museum of Florida, John and Mable Ringling’s home, called Ca’ d’Zan, is three rings of 1920s nouveau riche. Yessir, there’s a huge collection of Medieval to nineteenth-century art. I was excited when I arrived because it was lunchtime and I was hungry and I had heard that they had the greatest Rubens in the United States. Imagine my disappointment when I learned they were not serving grilled corned beef and sauerkraut on rye.

Now, you know I like fine art-y things and all, but I was there mostly to see circus stuff.

In the circus museum there is a display for a costume of noted little person – and close pal of P.T. Barnum – Gen. Tom Thumb (whose real name was Charles Sherwood Stratton). To protect his costume from deterioration due to light, a small theatre curtain surrounds the display. One pushes a button and the curtain rises. I pushed the button, the curtain rose, and there it was! Next to Tom’s military uniform, my saber! Well, not really my saber of course, but the exact same design and manufacture, obviously fashioned by the same craftsman. The steel scabbard, the detailed leaf engraving, all in perfect scale. Beautiful!

I have taken to using my sword to open my mail. One day at my desk, as I was admiring my little saber. I held it and thought the actual use of that which it models. It is, simply put, a weapon. I picked up the Bic® with which I had been writing. I said aloud as I looked at these objects, “The pen is mightier than the sword.”

Indeed, my cheap, yellow pen (attained with compliments from a Days Inn) could write anything. Poetry or prose. Fiction or fact. A treaty. The Constitution. A grocery list.

But a sword, no matter how ceremoniously and elaborately decorated, is simply designed to kill.

Despite that, maybe using my beloved little saber to free my mail from the confines of an envelope gives it a noble purpose.

As the Prophet wrote: “…And they shall beat their swords into plowshares, and their spears into pruning hooks.” (Isaiah 2:4)

With that in mind, here is something I would like to impart to the legislature of Mississippi who has gone to the trouble to pass “The Mississippi Church Protection Act.” This would allow parishioners to bring their guns to church. I am pretty sure when statesmen were crafting this bill, there weren’t any mutterings of that Christian catchphrase, WWJD (What would Jesus do?).

The Prince of Peace said, “Put your sword back into its place; for all those who take up the sword shall perish by the sword.” (Matthew 26:52)

The Rabbi said this to one of his disciples who wielded a sword. After he had been praying. As he was being arrested.

Yes, yes, I know: what does this Mississippi business have to do with me? I do not live in Mississippi.

But I do know plenty of folks who live in such fear.

And I am aware that I am ticking off some people right now. That happens from time to time. A friend of mine once said, “Andy, you’re supposed to be funny, but sometimes you’re scary.”

As poor Rosencrantz put it to Hamlet, “Many wearing rapiers are afraid of goose quills…”

So, gentle reader, no matter your faith tradition, while we live in these instant-and-unending cable/internet-news times, here’s to cool hearts and cool heads and the real courage that passes understanding.