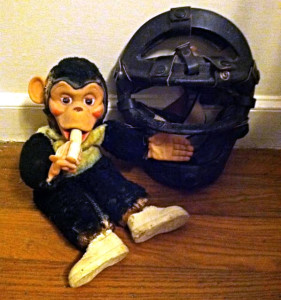 When I was a kid I was given a stuffed animal, a chimp. I named him Chimpy. (I know the correct term for such a thing is “plush toy,” but Chimpy wasn’t so plush.) Chimpy was given to me by my beagle, Pooh, who came trotting into the backyard from the cemetery and delivered him straight to me. Pooh had inadvertently torn off Chimpy’s left ear, but Chimpy’s smile remained the same.

This was probably when I was about seven, a good time in life for me to have a security friend to sleep with. Of course, I had already been given a Teddybear when I was a baby-kid-toddler, but Theodore was aloof, and even though I didn’t have the words for it, I could tell that his sewn-on smile was more sardonic than sincere. I felt desperate for him to like me, but he was a serious sort. Maybe I played with him too roughly after my father had given me a football helmet and I wanted someone I could actually tackle. I think he may have been more of the tea party type. Later he was given to bouts of melancholy, especially after he lost his right eye, the remaining left eye, a black dot within a clear casing that depended on gravity to determine the area of focus ~ that clear casing was crushed a bit from the tackling and my desperate hugs, causing it to turn white like the small-domed pop-down beverage indicators on the top of a fast food soft drink cup.

The remaining eye with its sad, cataractic stare
bespoke of one doleful,
self-involved bear.

But Chimpy was, and remains, steadfast and cheerful. Chimpy’s left hand has just enough flex to grip a small object, such as a Matchbox car. His right hand holds a perfectly ripe, peeled banana which fits satisfyingly in his mouth when he is hungry.

I have to say that, even at seven, I knew Chimpy was a chimp, and not a monkey. He is, by all definitions, a Great Ape. I learned this mostly from watching old Johnny Weissmuller Tarzan movies on Saturday mornings. In their treehouse, he and Jane and Boy had a comic relief chimp named Cheetah. Cheetah being called Cheetah caused me confusion, as it did for a lot of kids my age when we learned the world’s fastest land animal, a large feline, bears the same name.

But I also knew Chimpy was a chimp because I was constantly returning to one of the first important books in my life: My Friends the Wild Chimpanzees by Jane Goodall. It remains my favorite nonfiction children’s book.

Chimpy and I are both offended if anyone calls him a monkey. He does not have a tail. Apes do not have tails. Chimpy wears white tennis shoes. Monkeys do not wear shoes.

As I indicated, Chimpy is still around (alas, Pooh is buried in the backyard, at the very spot where he lay Chimpy at my feet that summer’s day). Chimpy now holds court on a bookshelf in my office. At some point, when I was moving stuff around, I couldn’t find him. But then he appeared under my desk, his nobel head sporting a red Solo® cup. Ah yes, I wasn’t surprised to learn he had joined up with the Shriners.

It goes without saying that I love Chimpy. For so many years he was my security ape, my nighttime confidant, and although with his one ear he lacked stereophonic hearing, he was always a caring and attentive listener.

But something has always troubled me about Chimpy.
Where did Pooh find him? Is there a kid out there ~ now in late middle age ~ missing him?

My son and I frequent a boutique in our town called, Repairers of the Breach. Think a poor man’s Goodwill. We love this place. If we need something like a cassette player motor, this is where we go. This is where Liam scored his perfectly-fitting, double breasted, peak lapel suit for the homecoming dance. It was eight dollars.

In our town, if you buy clothing in good condition at the thrift store, the odds are the original owner is dead. It’s the same for furniture. When I was a church youth director, all the furniture in the youth room was supplied by members who had passed away. Some of this furniture even came with a little brass plaque: “Given to the Glory of God in memory of Maggie Hohandle by her beloved son, Martin Hohandle.” All my kids respectfully called it “The Maggie Hohandle Memorial Sofa.”

This past October, I made my way from a gig in Athens, Alabama to a show in Anderson, South Carolina. On this route, before leaving the state of Alabama, I was advised to stop by the little town of Scottsboro to experience a store called, Unclaimed Baggage. The name says it all; this is where the unclaimed luggage of the airlines of these United States ends up (after a three-month tracing process). Well, it just so happened that I was in need of some new “show clothing,” so I bought three sweaters. One of these had never been worn and still bore a tag; it was knitted from the wool of such noble sheep, by a manufacturer of such high repute and quality, that I would not have been able to afford it in nature. I was greedily giddy with my purchases; I got out of there having spent less than twenty dollars.

But when I donned it, a chill went up my spine. I started thinking about Chimpy.

Okay, so if I find an item at Repairers of the Breach, I can rest assured that said item was donated by a family member, a benevolent survivor of that deceased loved one who might have said, “Grandpa would want someone to enjoy these shoes for a second time.” Or an item could have been donated by someone who had upgraded their electronics. Or maybe someone had read and finished that book. Or, after doing a clear-out of the kitchen, someone may have questioned the veracity of the writing upon a coffee mug, bestowing upon another person the title, “World’s Greatest Husband.”

But these sweaters from the lost baggage store clearly once belonged to someone who never wanted them gone! Indeed, there is a bit of anguish associated with these sweaters. Maybe even some bad juju.

I mean, on one of those days during which you have been patiently awaiting your luggage to come down the chute and/or ride on the belt, have you ever spied the hapless travelers lined up outside the little glass cage of the baggage services office of their chosen airline? Have you ever been one of those persons? (And have ever wondered what act of ignominy must have been committed by the airline worker who ended ended up serving as the luggage services agent?)

In my warm, cozy sweaters, I think about those lost-luggage people, just as I think about a kid who is now in his or her fifties in Covington, Georgia, who may now and again, think on a beloved stuffed Chimp that was lost.

Or worse… stolen by a beagle.