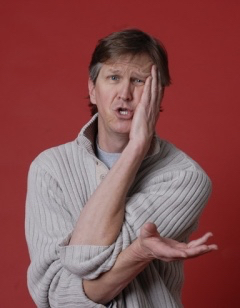 With a silly putty voice, hilarious heart-filled stories, and amazing mouth noises (arguably, the greatest whistler in the world) one-person-showman, Andy Offutt Irwin, is equal parts mischievous schoolboy and the Marx Brothers, peppered with a touch of the Southern balladeer. One of the most sought after performing storytellers in the United States, Andy is especially known for relating the adventures of his eighty-five-year-old-widowed-newly-minted-physician-aunt, Marguerite Van Camp, a woman who avoids curmudgeonship by keeping her finger on the pulse of the changing world around her as she seeks to grow – even at her advanced age – in the New South.  Marguerite steps lively through this existence, loving as many people as she can.

October of 2019 marked Andy’s tenth year as a Featured Teller at the National Storytelling Festival. He has appeared fourteen times as Teller in Residence at International Storytelling Center. Among other gigs, Andy has been a Guest Artist at La Guardia High School of Art, Music, and Performing Arts in New York (The “FAME!” School); he has been a Keynote Speaker/Performer at the Library of Congress-Virburnum Foundation Conference on Family Literacy; a Guest Writer Performer with the Georgia Tech Glee Club; and a guest composer with the Amherst College Men’s Double Quartet.

Andy has held a few almost-real-jobs that include: Artist-In-Residence in Theatre at Emory University’s Oxford College from 1991 to 2007. (He continues serving at Oxford from time-to-time as Artist-in-Just-Passing-Through). A very long time ago Andy spent five years as a performer, writer, and director for SAK Theatre at Walt Disney World.

Andy is the recipient of many awards, but he is tickled as can be to have received the Oracle 2013 Circle of Excellence from the National Storytelling Network.

He thinks he is funny.

“…An accomplished singer-songwriter, Irwin tackles genres like a veteran defensive lineman tackles quarterbacks … The man’s a master musician with some VERY talented lips.”

“You laugh, then you laugh harder, then you sigh, then you listen in awe. Breathing in life.”
~ Grammy® Winners, Cathy Fink and Marcy Marxer
“… In 2005 Andy and I were both newcomers to the National Storytelling Festival. During a break I went over to see the ‘other new guy’. I was not prepared. Andy took me on a journey unlike any other, full of heart and gut busting humor all wrapped in a hauntingly, beautiful story. What separated him from any other teller was his characters. Like Charles Portis, flesh and blood people born of great imagination. visceral and nuanced, we immediately know and love his family because it’s our family…. Since then I have had the joy to share the stage with Andy. An incredibly giving soul, he wants everyone around him to do well. Then he humbly takes the stage and blows the lid off the joint. For all his audacity he has a giant giant heart…