A Message from the Confederate Monument in My Town

This was written on June 19, 2015 after the shooting at Emanuel African Methodist Episcopal Church in Charleston, South Carolina. Many citizens were calling for the removal of the Confederate Battle Flag from the S.C. Statehouse grounds.
•   •   •   •   •   •  •

When I give workshops on humor, I always say: Keep parody

close. Keep deprecation (insults) first-person  close. For me, speaking as a white man in United States – pretty much the most privileged demographic group in the world – I think it’s a good policy to keep political criticisms very,  very close.

I was born, and live in The Deep South. A good portion of my family has lived in the same area, Newton County, Georgia, for at least six generations. Therefore, I am going to keep my criticisms close and focus on Georgia.

When I was child in school, I would often hear a particular bit of rationalization regarding the Civil War. There were plenty of white people who would let me know that the war was not really about slavery; it was about States Rights.

Actually, the war was about the Confederate States’ right to maintain an economy based on chattel slavery. These men were in fear of losing the right to a slave-based economy. That is clear within two sentences of Georgia’s Ordinance of Secession, a document I believe every student of Georgia history should read in its entirety:

“For the last ten years we have had numerous and serious causes of complaint against our non-slave-holding confederate States with reference to the subject of African slavery.”

The Confederate Battle Emblem was part of the Georgia state flag from 1956 to 2001.  The Confederate portion of the flag had been put there in 1956, the year following Brown v. The Board of Education. The flag was designed by John Sammons Bell, a noted and vocal segregationist. The Georgia Legislature passed numerous laws upholding segregation in 1956. Cleary this is why the Confederate battle flag made up two-thirds of Georgia’s 1956 banner.  The argument (made much later) that this flag was in honor of Confederate solders and war dead for the upcoming centennial of the war can be debunked by the published sentiments of Confederate memorial organizations, such as the Daughters of the Confederacy.

” They (the Georgia Legislature) made the change strictly against the wishes of U.D.C. chapters from all the states that form our organization.”

At the time, these women spoke of, “One nation, under God, indivisible…” The ladies of the U.D.C. were a sensible lot.  In Georgia – indeed, in my own family – many of these women were the daughters and granddaughters of women who had seen the war up close as the Union Army  “Marched to the Sea.” The organizations were formed to honor the Confederacy and the “Lost Cause,” but many were those who advocated the New South and a newly found patriotism for The United States.  On January 11, 1956 the Executive Board of the Georgia Division of the United Daughters of the Confederacy passed a resolution in opposition to including the Confederate Battle Flag on the Georgia banner.

Symbols are important. And the meaning of a symbol can change. Case in point: the Swastika. The Swastika is an ancient symbol. Even the word, “swastika” comes from Sanskrit – the language of Hinduism, a far cry from German, the language spoken by the people with whom we associate that emblem. Throughout history, in different regions, religions, and societies, there have been examples of crosses with four bent arms, but now, when that symbol appears on the arm band of a Nazi, or on Klansman’s robe, or when it is scratched on the door of a bathroom stall, its meaning is clear.

Or a belt buckle.

Or a statehouse lawn.

Honest people know. We all do.

I can walk out my back door, past the graves of slaves, many of whom I am certainly related to. I can walk past the graves of Confederate soldiers who died in my home church. It doesn’t take me ten minutes to arrive at my Town Square. There, in the middle of the Square, in the middle of my town, stands a monument erected on April 26, 1906 by those Daughters of the Confederacy.

There’s a message to us there.

A message from women who lived through war.

The message tells us to put that flag away.

Go. Look for yourself.

For all the world to see.

beneath the image of the flag it reads:

ITS FAME ON BRIGHTEST PAGES

PENNED BY POETS AND BY SAGES

SHALL GO SOUNDING DOWN THE AGES

FURL ITS FOLDS THOUGH NOW WE MUST.

Furl its folds. Now, we must.

God Bless Us All this week  –  Andy 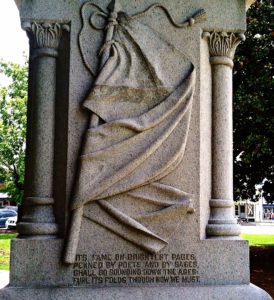